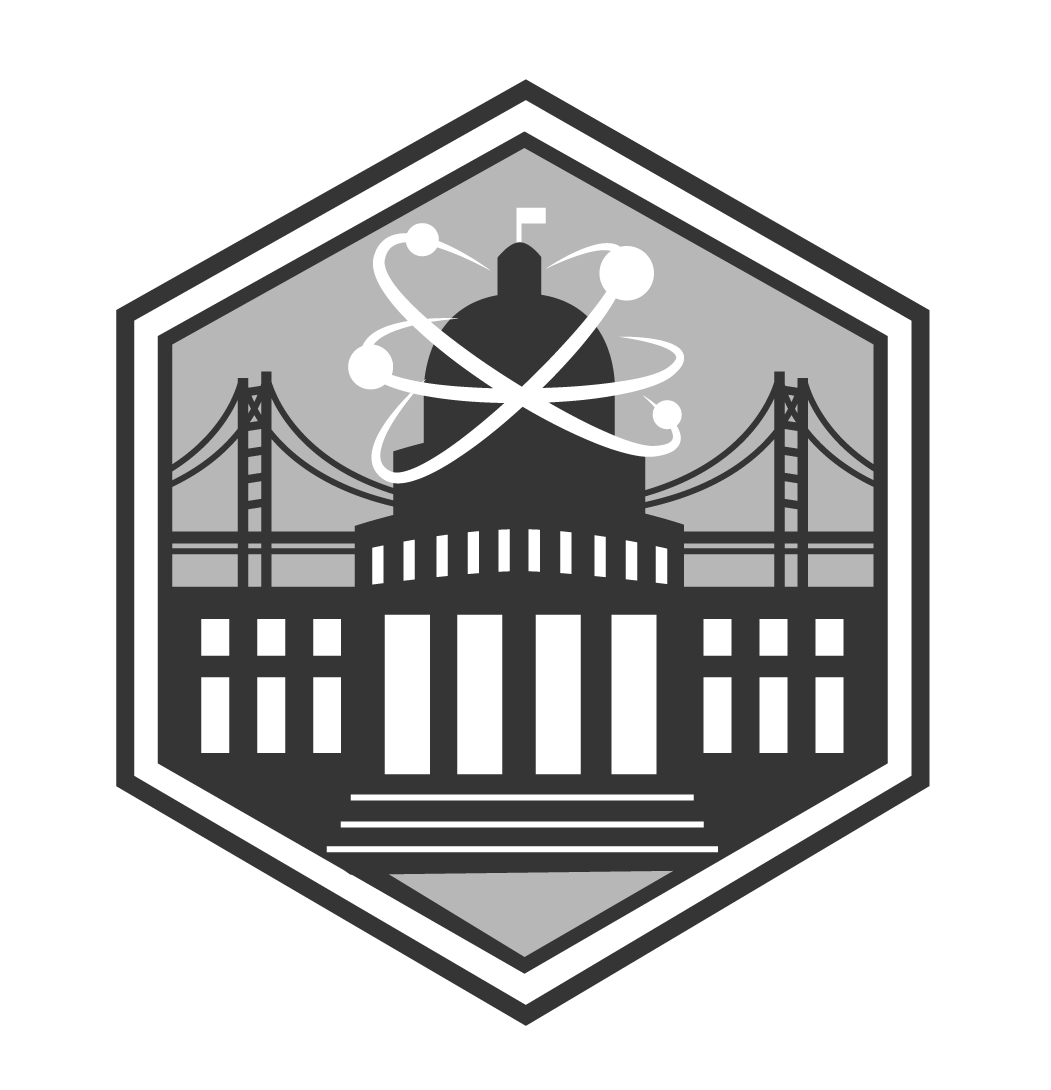 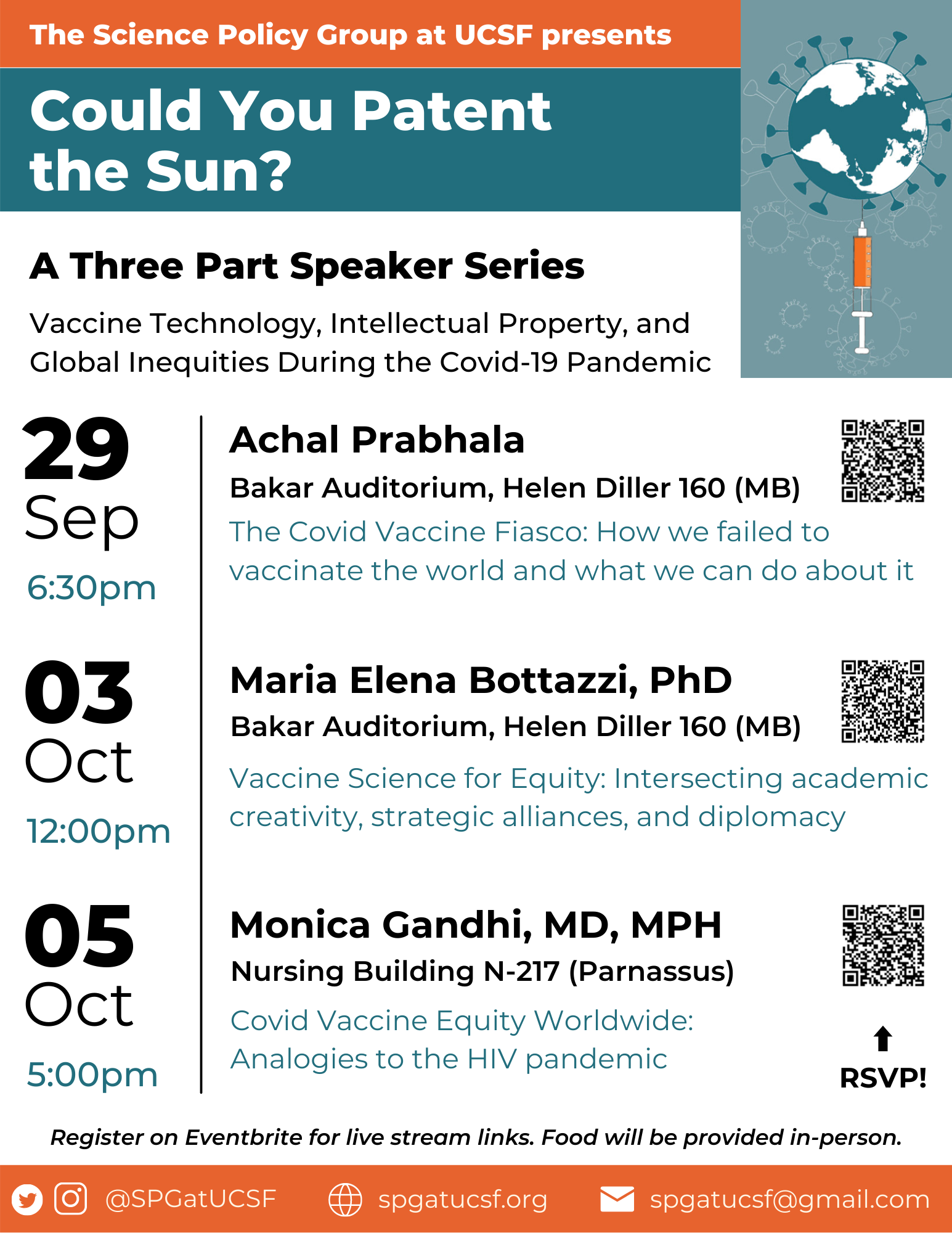 "Could you patent the sun?" is a three-part speaker series that will consider the global rollout of mRNA vaccines during the Covid-19 pandemic and the gross disparities in access to vaccine technology and other therapeutics that resulted between Global North and South. These cross-disciplinary conversations will explore the logistics of vaccine research, production, and distribution with attention to how legacies of global imperialism and intellectual property law have shaped who ultimately has access to lifesaving technologies.

When Jonas Salk developed one of the first polio vaccines, he affirmed it as public domain.  When asked who owned the patent to the vaccine, he replied “Well the people I would say.  There is no patent.  Could you patent the sun?”.  We invoke Salk’s rhetorical question to create an opening to reconsider our current trajectory.  What are next steps forward and what could a more internationalist and collaborative practice of science look like?

Could you patent the sun?: https://www.youtube.com/watch?v=erHXKP386Nk 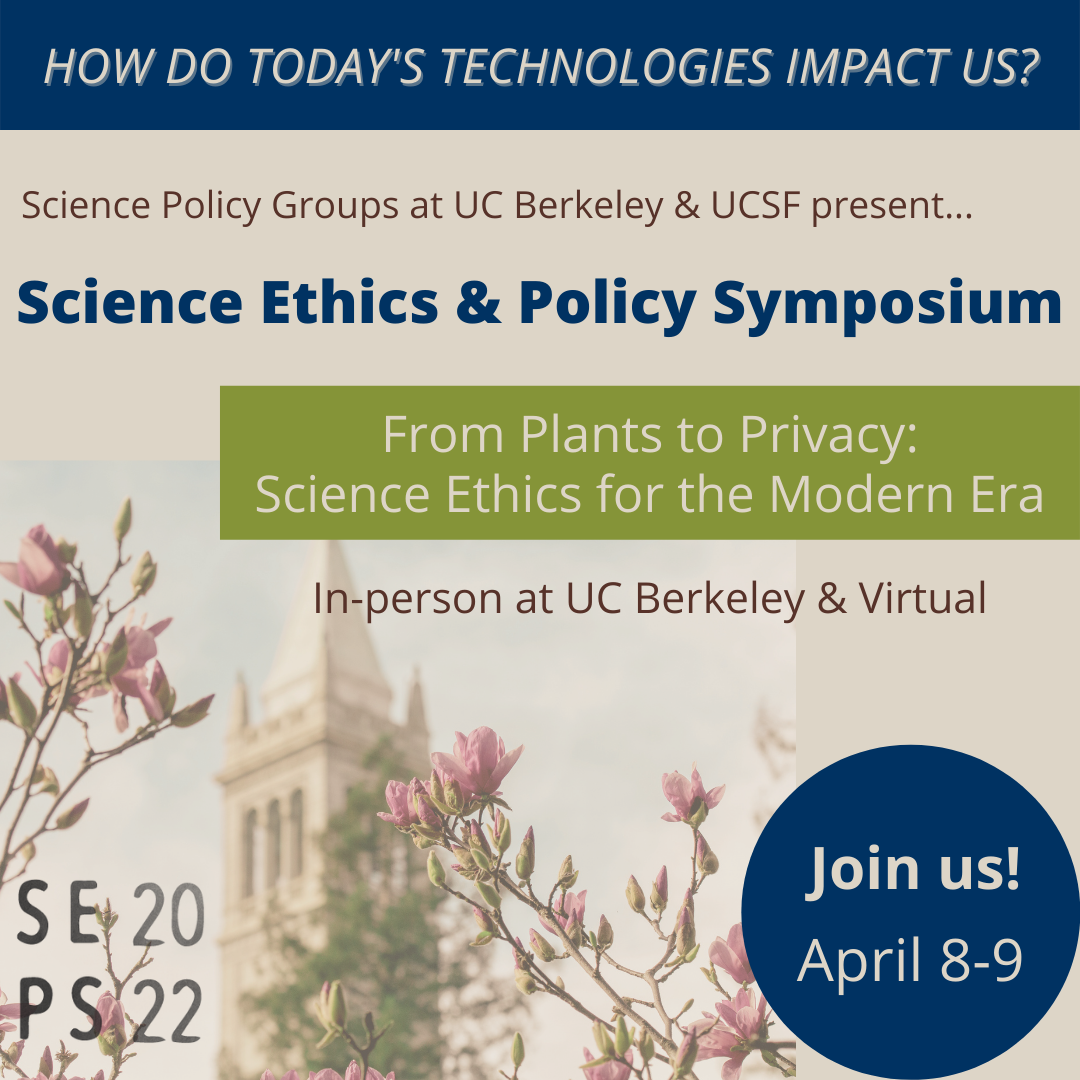 Join the Science Policy Groups at UCSF and UC Berkeley for our first ever Science Ethics and Policy Symposium, "From Plants to Privacy: Science Ethics for the Modern Era," taking place on April 8-9th at UC Berkeley! This event explores the unintended consequences of new science and technology. How can innovation exacerbate economic or racial inequity? How does novel science and tech impact every community, especially those whose perspectives have been historically overlooked?

This virtual panel will feature experts on the history and policy of housing, homelessness and evictions in the United States. We will ask hard questions as part of a discussion to better understand the current crisis and viable steps forward. Speakers were Dr. Margot Kushel director of the UCSF Center for Vulnerable Populations, TJ Johnston editor of Street Sheet, Rosemary Ndubizu Professor of African American Studies at Georgetown University, and Shanti Singh Legislative Director of Tenants Together. Moderated by Chad Altobelli and Toshio Meronek freelance housing journalist.

Join the SPG and OCPD for our annual State-Level Science Policy Fellowships Panel. This event will feature a panel of former fellows of the California Council on Science & Technology (CCST) Science Fellows Program, which places fellows in the California legislative and executive branches and, for the first time, a current inaugural fellow for the Missouri Science and Technology (MOST) Policy Initiative. Science policy fellowships offer a fantastic opportunity for researchers to explore the policy realm. These fellowships give graduate students and postdocs invaluable policy experience that they can either apply in their future research careers or use as a steppingstone into other sectors. The event will be a great chance both to get insights and advice whether you are interested in applying for a fellowship or curious to hear about career options in science policy and beyond.

1) Brittany Whitley, PhD, works as the Education & Workforce Development Policy Fellow for the Missouri Science & Technology (MOST) Policy Initiative. Prior to starting at MOST, she earned her PhD in Molecular and Cellular Biology at the University of Washington- Seattle and a B.S. in Neuroscience from Bucknell University.

2) Sandra Nakagawa, PhD, is a consultant in the Assembly Housing and Community Development Committee. Before joining the Legislature, she received a PhD in Sociology from Stanford and BAs in Sociology and English from UC Berkeley. In 2018 Sandra was a CCST Science and Technology Fellow in the Assembly Judiciary Committee and later worked as a Legislative Aide in the office of Assemblymember Mark Stone.

3) Cristina Echeverría Palencia, PhD, works as a climate investments specialist at the California Air Resources Board. Prior to her current position, she was a CCST Science Fellow at the California Strategic Growth Council and the Governor's Office of Planning and Research (OPR). Cristina is trained as a Civil and Environmental Engineer and a Chemical and Biomolecular Engineer.

COVID-19 has created challenges in communities across the US. STEM students have responded to meet these challenges with initiative and resourcefulness. This webinar highlights various student groups that are responding to COVID-19 in their local communities. Attendees will gain an understanding of what these groups are doing as well as the lessons they’ve learned on how to be most effective. We hope attendees will leave inspired to begin their own efforts to assist their communities in COVID response.

The Science Policy Group and the Office of Career & Professional Development are pleased to present a series of events featuring science policy fellowship alumni. Whether you are interested in applying for a policy fellowship or simply curious about careers in science policy, these former fellows' insights and advice are worth hearing. Science policy fellowships offer a fantastic opportunity for researchers to explore the policy realm. These fellowships, which range from three month to year-long placements, give graduate students and postdocs invaluable policy experience that they can either apply in their future research careers or use as a stepping stone into other sectors.

Did you know that this is the first open race for District Attorney in San Francisco in over 100 years? Did you know the election is in a little over a month (November 5th)? Come out to the District Attorney Debate on Mon., Oct. 21, 6-8 pm, in Byers Auditorium of Genentech Hall at UCSF’s Mission Bay Campus (250 Campus Way). Doors open at 5:25pm.

For the first time in over a century in San Francisco, this year’s election is an open race with four visionary new candidates. Come hear the candidates talk about issues such as mental health, mass incarceration, violence as a health issue, and whatever other issues YOU can think of. Questions will be community/audience-submitted! We will have VOTER REGISTRATION on-site--this will be last day to register (including change of address)!

Hosted by the Science Policy Group at UCSF and the UCSF Philip R . Lee Institute for Health Policy Studies, this event is a great opportunity for the UCSF community and public to learn more about each candidate’s views on the criminal justice system and how they plan to serve our communities. Light DINNER will be served.

Opening Remarks by: Emile DeWeaver. Emile DeWeaver became a published writer, community organizer, and co-founder of prisonrenaissance.org while serving a 67 year to life sentence. Gov. Brown granted him clemency in 2017. Emile is interested in internalized systems of oppression and how they prevent us from building and maintaining effect models of justice. He guest lectures at social justice venues and in universities about his written work, what he calls liberation models, and what he calls the lying fiction of criminality.

This is a non-partisan event, as such there will be no campaign literature, buttons, or promotional materials permitted in the auditorium.

The debate will be moderated by Dr. Brie Williams. Brie Williams, MD, MS (Director, The Criminal Justice & Health Program at UCSF) is a Physician and Professor of Medicine at the University of California, San Francisco. Dr. Williams collaborates with colleagues from criminal justice, public safety, government and the law to integrate a healthcare perspective into criminal justice reform. Her research has called for increased attention to the impact of solitary confinement on adverse physical health outcomes; a more scientific development of medical “compassionate” release policies for incarcerated patients with serious illness; and improved systems for defining, recognizing, and responding to disability, dementia, and serious illness in the correctional environment. Dr. Williams has served as a consultant for jails, prisons, and legal and policy organizations throughout the U.S. and internationally, including the National ACLU, the U.S. Sentencing Commission, and the World Health Organization. As Founder and Director of Amend at UCSF, her work is increasingly focused on transforming culture in U.S. prisons and jails as a vital strategy for restoring health and humanity to the U.S. criminal justice system and ending mass incarceration.

The Philip R. Lee Institute for Health Policy Studies (PRL-IHPS), a co-host of this event, contributes to the solution of complex and challenging health policy problems through leadership in research, training, technical assistance, and public service. Our special competence lies in translating research across disciplines and fields to inform health policy. We undertake this work with a commitment to improve health and health care within local, state, national, and international communities and with a focus on improving the health of vulnerable populations.

The following candidates have confirmed that they will be in attendance (in alphabetical order): Chesa Boudin, Leif Dautch, Suzy Loftus, Nancy Tung

Are you ready for November 5? The non-partisan organization League of Women Voters of SF is hosting a San Francisco ballot initiative forum. Learn more about what’s on the ballot and how you can engage.

Part of a series on communicating your expertise to the public and policy makers. Submit a science related op-ed to a newspaper, journal, or online publisher to be eligible

Click to show/hide details ▼
October 30, 2018
Briefing from the NASEM on the Sexual Harassment of Women

Earlier this year, the National Academies of Sciences, Engineering, and Medicine (NASEM) released a consensus study report on the issue of sexual harassment of women entitled, "Sexual Harassment of Women: Climate, Culture, and Consequences in Academic Sciences, Engineering, and Medicine." The entire report isavailable online here, and the report highlights are available here.

UCSF government relations provided information, tools, and skills to better equip scientists to advocate for basic research, higher education, science funding, and scientific rigor in policy and decision-making. Co-hosted with the Graduate Division as part of the Advocating for Science and Scientists in 2017 and Beyond series.

A workshop on how to leverage social media to communicate science.

An interactive workshop on how to tailor your research to a specific audience, including legislators.

Ron Vale and James Fraser led a discussion of the value of preprint servers in accelerating and advancing science communication and education as a follow-up event from the ASAPbio meeting held in Washington DC in February 2016.

A panel on Science communication with Carry the One Radio, iBio, Youreka Science, and the dedicated publicity and outreach team at UCSF, all of whom work hard to communicate science to the public in engaging and exciting ways.

Former White House Fellow Charina Choi spoke about her experience in the Office of Science and Technology Policy under the Obama administration.